I started a .NET Developers group in Windsor-Essex.  Why? Well first a bit of back story. I first started using .NET with C# around 2003-2004 with .NET 1.1.   At the time I was primary using Linux as my desktop and writing PHP and Python and creating web apps. However, I was required to create a Native Win32 app.  I had used Delphi and Object Pascal just prior but decided to use take the .NET route. 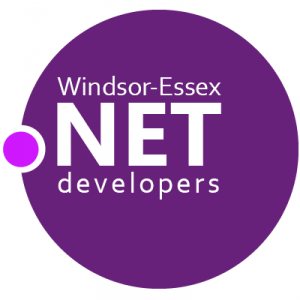 Fast forward 13 or so years and I’m still using and for the most part enjoying the ride.

A lot has changed in the past 13 years or so since I first started using it.  Coming from a Linux and OSS communities in Python and PHP to a more closed world in .NET felt very odd.  Simple things like finding code samples or libraries that were OSS were few and far between.   Everything was commercial. But slowly, over time the OSS community has grown and has developed a not only some great software, but has really started to form a community that I felt early in my career with other languages. Yes there is still a ton of work to be done. It’s likely the majority of .NET developers are stuck in a Microsoft only bubble, but I do think that’s changing.

I do think being in a Microsoft bubble is a bad thing.  I don’t say that as a negative towards Microsoft.  What I mean is that limiting yourself to only the framework, libraries and tools that are produced by Microsoft is incredibly limiting.  Hammer, meet nail. But Microsoft’s turn to OSS is refreshing.  Yes they have struggle at times but I do truly believe their underlying intention is good.

I’ve decided to start a .NET Developers group in Windsor-Essex.  This has been in my mind for around the last 5 years or so. I finally decided to take action because I think with the release .NET Core and the open community that is slowly being built is a kind of renaissance for .NET

Exploring the use of .NET for building and deploying applications on any platform. Our focus will be on the various .NET Platforms (Full Framework, Core, Mono), OSS libraries and various development concepts.  The purpose of this group is to create a great social group in Windsor-Essex where we learn from each other.

If you are in the Windsor or Essex County area, please join our Meetup page. We will be having monthly meetups on the first Tuesday of each month at Hackforge (255 Ouellette Ave)

My biggest challenge with organizing is getting speakers.  If you run or attend a .NET user group and have suggestions on different ways to attract local speakers or any feedback in general, please let me know in the comments on twitter.