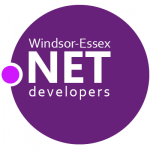 Back in June 2016, I posted about my experience starting a User Group.   It covered some of the basics of the very initial forming of the group and various feedback.  Since it’s now been half a year and we’ve had 6 meetups since then, I figured it was time for a post about how it’s been running a .NET User group.

Originally thought the toughest part of running the user group would be getting speakers.  However, this early on in the life of the user group, it hasn’t been much of an issue.

I think there is one main reason for this.

I already had a pool of people in mind to do talks from the very beginning of starting the group.  As each meetup goes by, my pool shrinks.  At some point this will become a concern.

This is the most challenging part of running my user group.  I want it to be well attended and grow.  It’s very early still and we have new faces show up each month, which is great.

My main way of reaching people is standard word of mouth and various social networking announcements.  This will change.

I was recently at a conference and met up with Ken Cenerelli and Tom Walker.  One suggestion I was given by Tom, was that he periodically holds their meetups at a sponsoring company location.

I think this is a very interesting idea because then at least makes that sponsoring company’s developers aware of the meetup, which they may or may not of known about prior or of attended.

I plan on trying this out in the new year and seeing if there are some positive results.

People love free stuff.  And it’s even better when it’s useful.  I’ve been lucky to get a few early sponsors which have been great.

Microsoft Technical Communities is a great way to submit your event to be posted on their site as well as request food sponsorship for your event.

Telerik has sponsored us with swag and software licenses to give away each month.  They were really great in sending me a box of swag right after my email request for sponsorship.

DevExpress just recently provide us with CodeRush for Roslyn license to give away each month.  I received their notification of sponsorship while we were hosting our November meetup which was perfect timing!

There is so much content and ways to learn online, there really isn’t any need to go to a user group with the primary goal to learn.

The main reason is for going to a user group is networking.  To make new connections and strengthen existing ones.

If have you run a user group and have suggestions I’d love to hear from you. Please leave comment or let me know on twitter.

One thought to “Running a .NET User Group”